The History of Letterkenny Tidy Towns 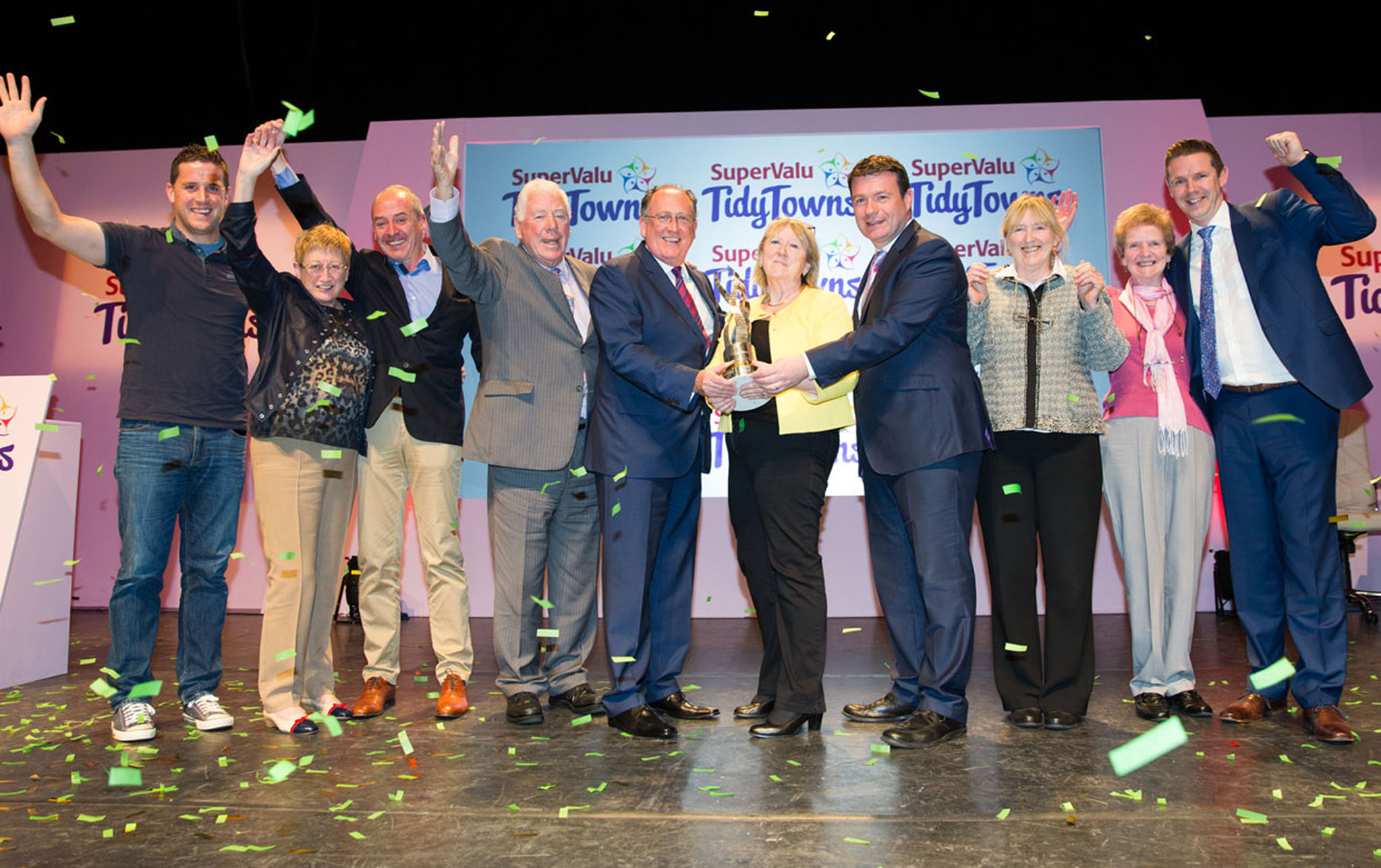 The following article appeared in the September 3rd edition of the Letterkenny Leader.

This month I’d like to look back at where we came from and how we got to where we are now.

The foundation of Letterkenny Tidy Towns.

Letterkenny was involved in the Tidy Towns competition right from its inception in 1959. However, by the 1970s, the town was becoming quite badly littered, and a little run down in places. To some, it was known as “Litterkenny”. An RTE documentary in 1975 was very critical of the town, painting it in a very bad light altogether. A lot of residents felt the picture it painted was highly unfair and unduly negative.

By the beginning of the 1980s, the Letterkenny Tidy Towns group had broken down, however as chair of the Chamber of Commerce, Jim McCormick, owner of Magees pharmacy got to work on revitalising the Tidy Towns group. He had no experience of such things, and was unsure of what needed to be done, but he worked with Cllr Jim Lynch, who became Chair, and Dennis Doyle, who was a Tidy Towns judge and offered a lot of advice and later became Vice Chair. As the years went by, Letterkenny Tidy Towns went from strength to strength. After a few years, Jim McCormick took over as Chair. The biggest challenge was the speed at which the town was growing, however the Tidy Towns committee kept working away, culminating in the ‘Tidiest large urban centre’ award in 2007. 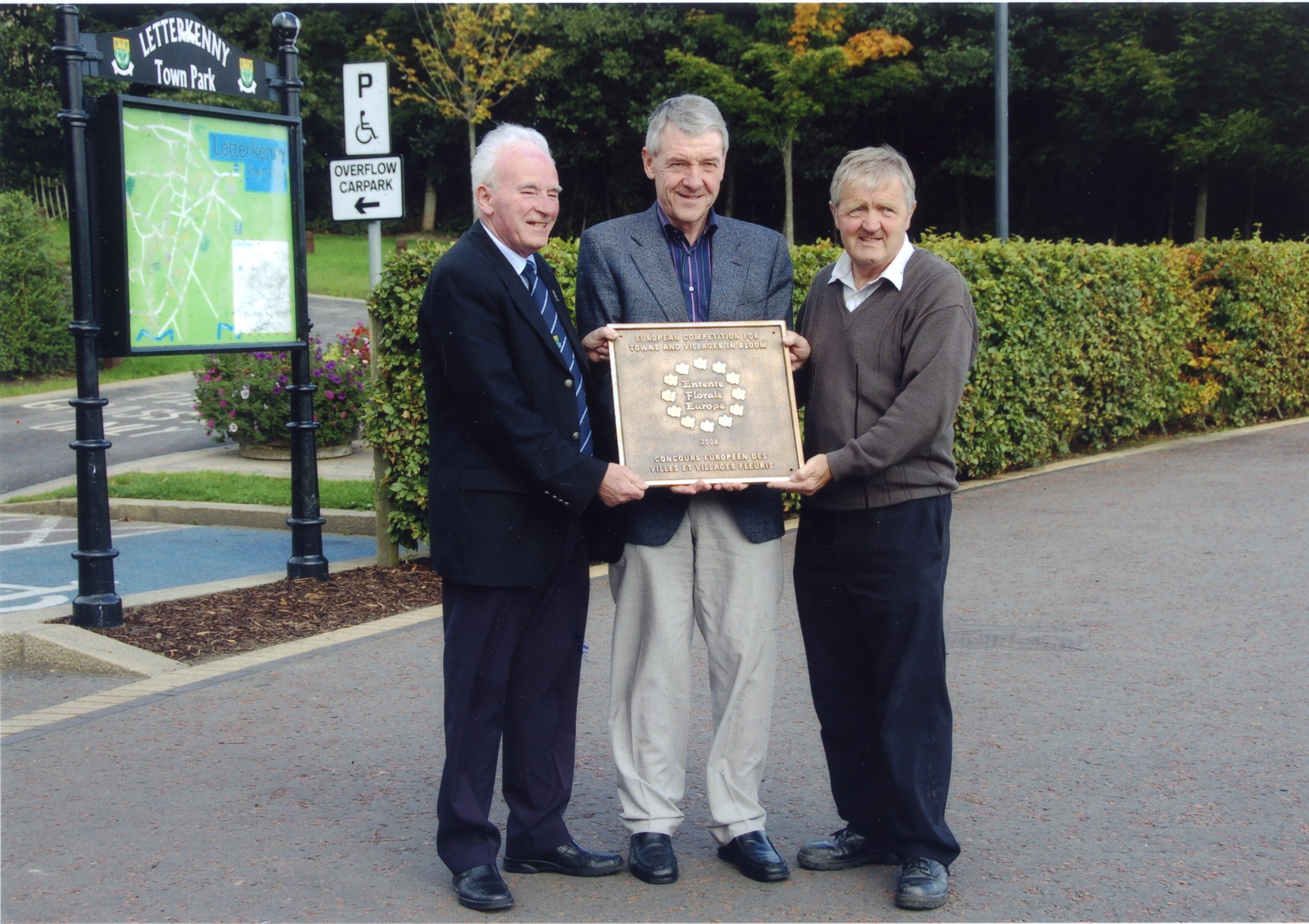 Now the work began to take it to the next level, as Letterkenny was a mere 3 points away from winning the overall title. However, Jim didn’t get to see his dream come true, as he sadly died in 2011, at the age of 69. His passing is marked by the Jim McCormick Memorial Garden by the Century cinema, where one of our ‘Flight of the Bee’ murals now takes pride of place. 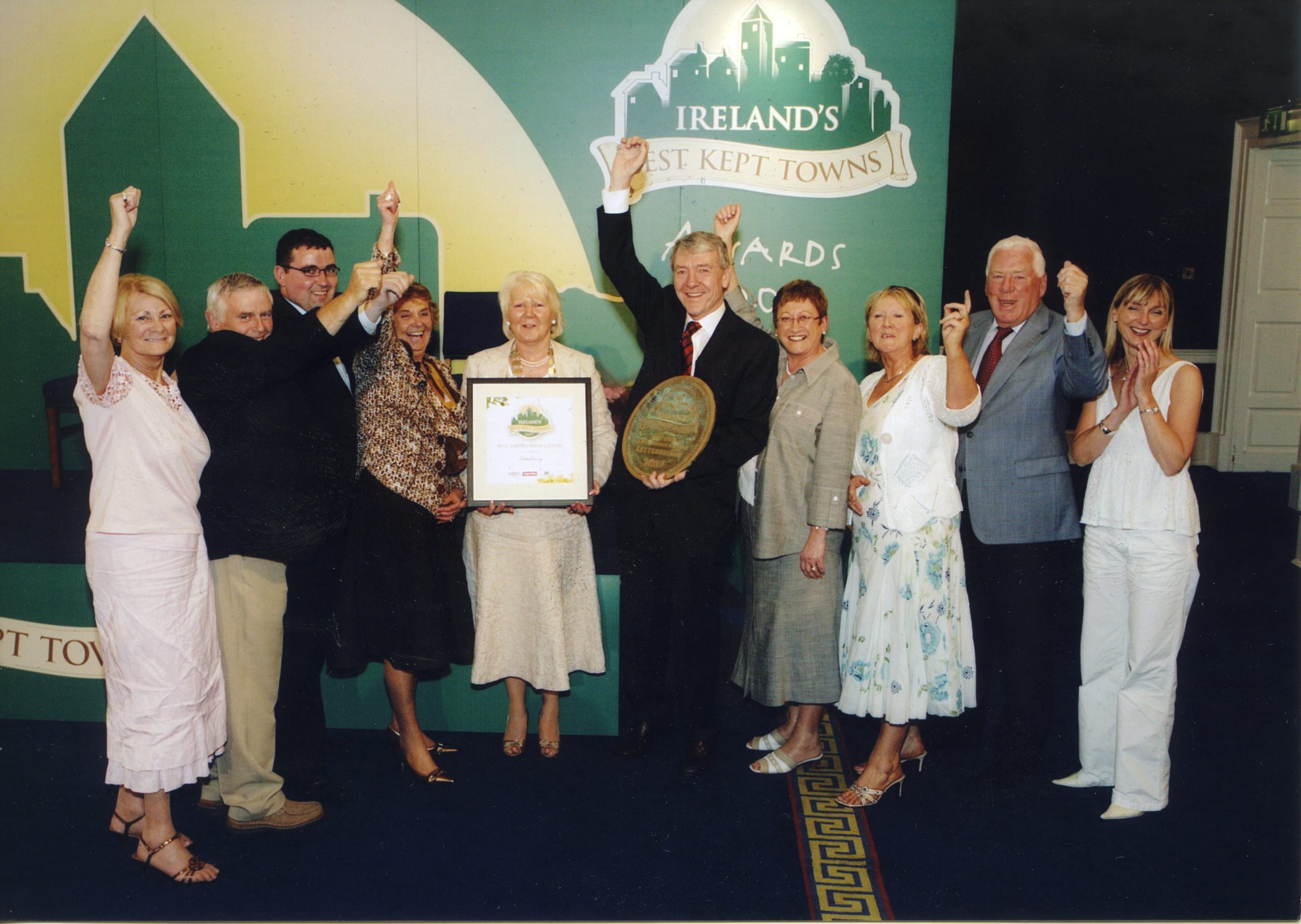 After the passing of Jim McCormick, the Chair was taken up by Anne McGowan, who continued the hard work. Over the next few years, Letterkenny continued to win numerous medals and awards. 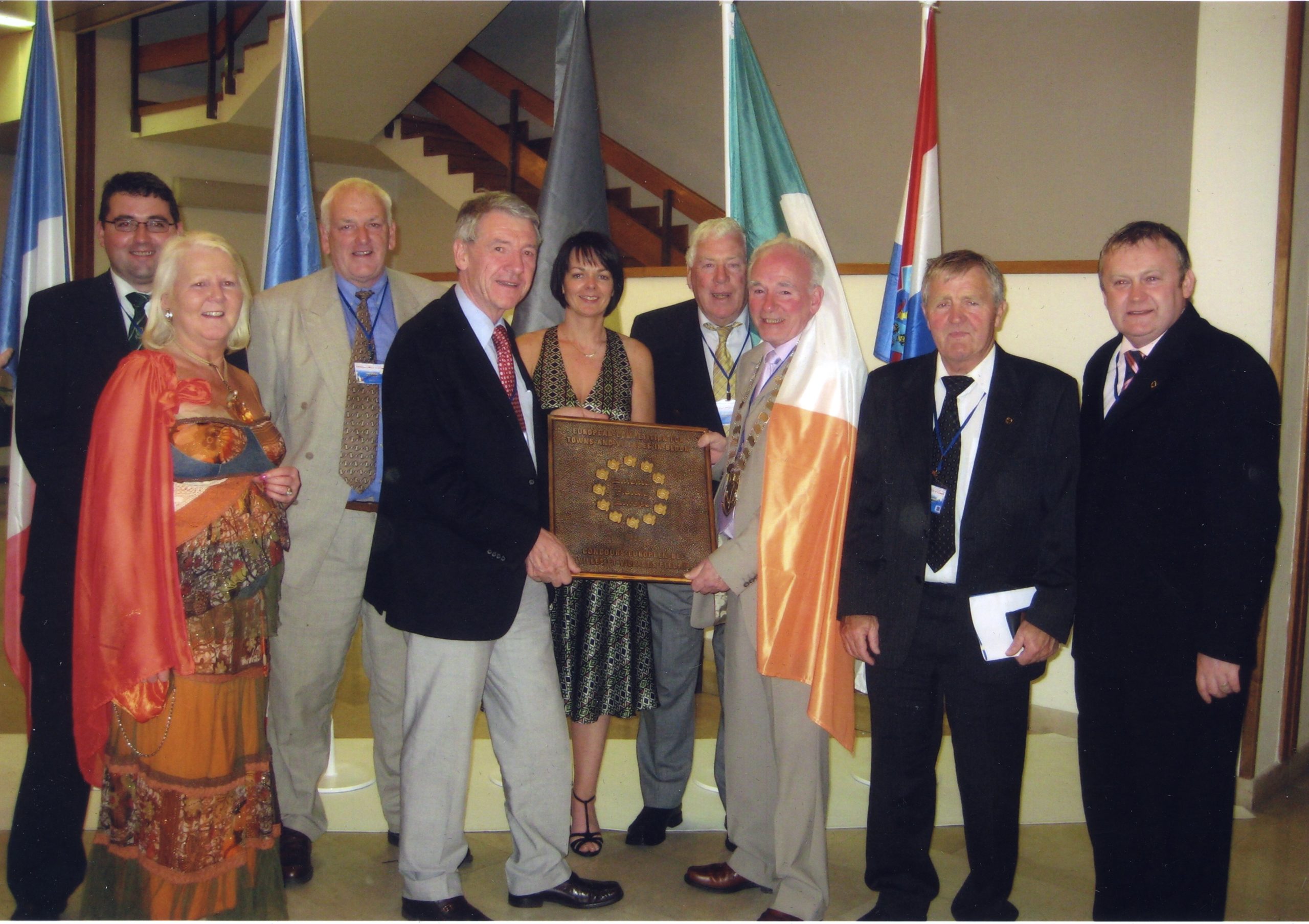 In 2015, after all those years of improvements, Letterkenny won the top prize. One thing that was highlighted by the judges was the landscaping and use of open spaces. At the time, volunteers were out 7 days a week, led by Anne along with Charlie Grant, who is still a leading light (and all-round force of nature) in many of our projects.

Pictured at the SuperValu TidyTowns competition were, Anne McGowan, Chairperson Letterkenny Tidy Towns (centre) with Martin Kelleher, Managing Director, SuperValu (left of centre); and Mr. Alan Kelly, T.D., Minister for the Environment, Community and Local Government (right of centre) and members of the Tidy Tows Committee as Letterkenny, Co. Donegal was named best of the 862 towns and villages throughout the country that entered this year’s SuperValu TidyTowns competition.

In recent years, our group has continued to work to improve the town under the Co-Cchairs Gerard and Brian McCormick, 2 of Jim McCormick’s sons. Our group has grown, in particular over the last 18 months, and we are involved in newer initiatives such as expanding our internet presence and improving biodiversity while continuing to focus on the same core activities as before.

The volunteer group includes a mixture of people born and bred in Letterkenny plus a growing group from the rest of Europe and all over the world. We’re particularly happy to see a group from the Direct Provision centre helping out regularly. Our volunteers are ably assisted by the CE scheme which operates out of An Grianan Theatre, and together we continue to work to make Letterkenny a highly liveable place and an attractive spot for visitors. 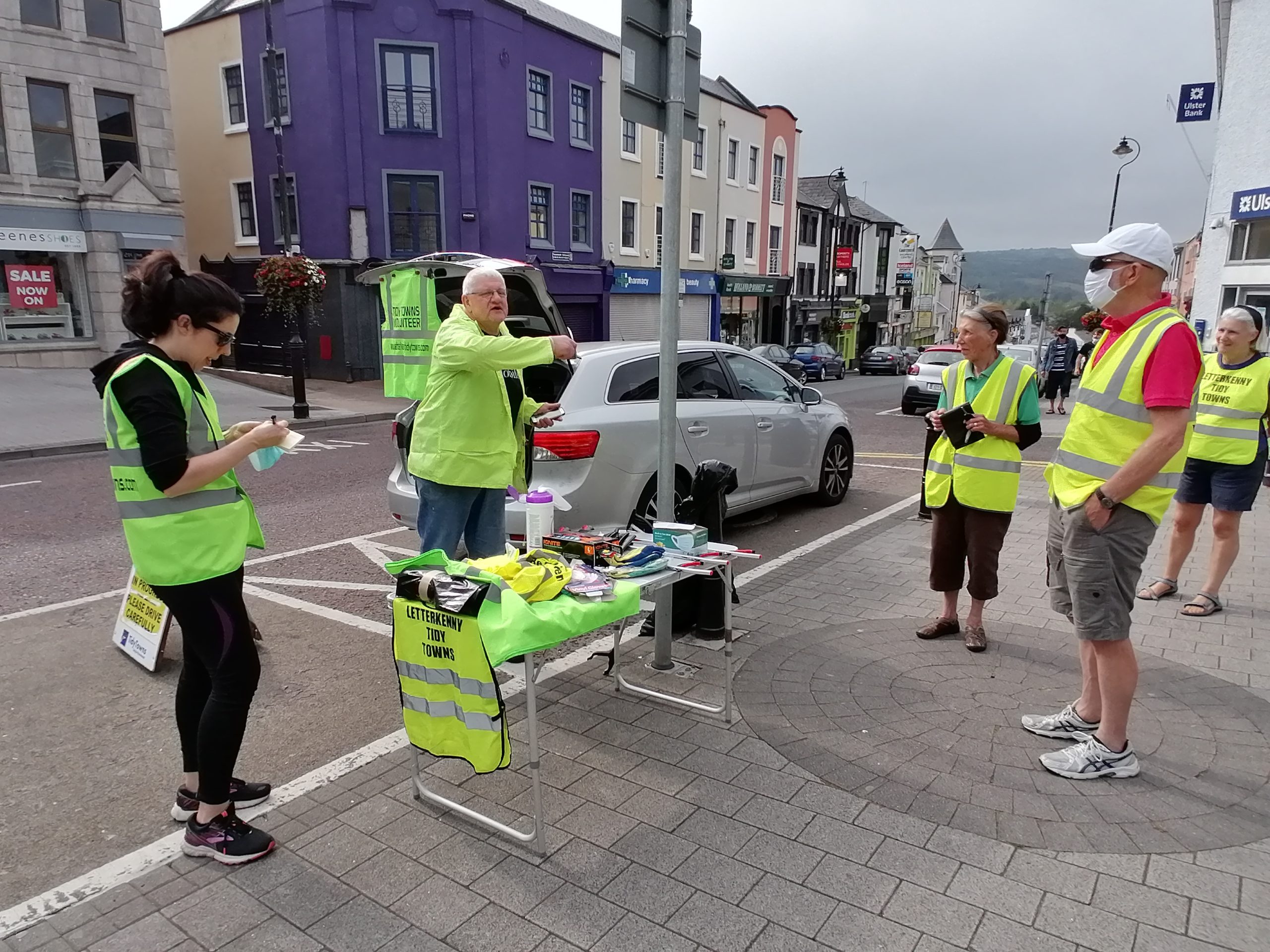 Neil Blockley co-ordinates a group of our volunteers.

I leave you with an example of how our members have always been keen to take every opportunity to improve the town. One year when the St Patrick’s Parade included an elephant. The inhabitants of the Tidy Towns float witnessed the elephant leaving a ‘message’ right in the middle of Main Street. Some might see this as mere animal poo, but our volunteers immediately thought of how great it would be as fertiliser. So after the event, they rushed home to collect a trailer and some shovels to clean up the scene. Only to find that someone else had had the same idea and was already carting off the prized manure. Where some see dirt, others see opportunity!